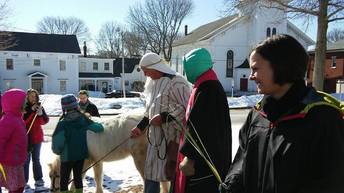 FAITH JOURNEY
Growing up in a patriarchal faith tradition, I never imagined leading worship or being a spiritual caregiver. The thought had simply never crossed my mind because in the tradition in which I grew up, women were not allowed to be leaders. My spiritual heritage grew out of a very rigid belief system which did not allow for change or challenging the system. My theological roots emerged from the southern tradition of the Church of Christ. The Church of Christ, unlike the United Church of Christ, has a literal, fundamentalist theology and understanding of the Bible. As a young person, I accepted this theology because it was all I knew. I was baptized into the faith of Lordship of Jesus Christ and all of my sins were washed away; all except for one.

It was during the summer before my sophomore year in high school that I became more self-aware and began listening to my body; I discovered I had same-sex attractions. From the teachings of my church I believed this attraction to be wrong and sinful. This was the one sin which was not washed away. I was scared and fearful of God, so I told no one about these feelings. Instead, I turned to my "Teen Study Bible" to reinforce the belief that these feelings were sinful. I remember that Bible's side column "bubble" explaining that homosexuality was a sin. At that time, sin for me was a "list" of things which were wrong or bad behavior.

Afraid and upset, I read my Bible and prayed for God to take this "sin" away. I prayed for years and tried to convince myself I was not gay. As Carter Heyward writes, "Christ became for me, during my teen years, a disembodied heavenly man to deliver mefrom my own body.”1 Years later, my mother would tell me that she was "sorry that being gay was the sin I had to carry."

During college, I had gay teammates who were good people, and even Christian. These friends made me begin to question my view on homosexuality as a sin. I still believed, though, that as long as you loved Jesus and believed in him then your sins would be forgiven. I held this reassurance that my friends could still reach salvation even though they were sinning. Throughout college I still did not tell a soul I was gay. I was closeted and trying not to be gay. My theology limited my perspective and interpretation of scripture, which led me into a sea of torture. The self-hatred I felt and the internal wrestling was (and is) all too common among southern gay and lesbian Christians. Unfortunately, many LGBT (lesbian, gay, bisexual and transgender) individuals turn away from God and faith. It was not until I met my future wife, Tracy, that I finally listened to my body and soul and accepted my feelings.

Shortly after I began dating Tracy we moved from Norfolk, Virginia to Nashville, Tennessee. This geographical move provided the separation from my family that I needed to further discover who I was. When we first arrived I continued attending the Church of Christ. For the first six months or more I remained extremely closeted. No one knew about my relationship with Tracy. We were just "friends". Eventually, we found a United Church of Christ (UCC) in Nashville which was Open and Affirming. That church was 99.9% gay and lesbian. It provided a safe haven for those in the deep Bible Belt. Overnight, I went from hiding at church to being accepted in a faith community.

Being a part of this church was a surreal experience. Previously, I attended church as a closeted, hiding Christian lesbian. At this new church I could be open, honest and true to myself as a gay woman. This was the first time I experienced an accepting faith community. I no longer had to wear my "Sunday best" and play the part, but I could be in community with the person I loved.

That Open and Affirming Church (UCC) in Nashville brought me out of hiding and opened the door to a new theology and a new way of becoming a Christian. Once Tracy and I moved to Salem, Massachusetts we found a new community which was not just a safe haven but provided compassion and demonstrated Christ's love for me. I wish the transition to a more liberal theology was as easy as unpacking my suit case, but it took years of work, guided by Reverend Laura Biddle. Through Pastoral Care sessions and Bible studies, she helped me see that I am created in God's image and that I am enough. I found a deeper understanding of God where I was no longer sinful, broken, or damned. As my spirituality grew in the UCC, so did my role within the community, including a variety of roles from the Chair of the Deacons to the Financial Secretary. Little did I know, my call to ordained ministry was beginning to grow. I could not get enough of serving others. One Sunday I had the opportunity to preach and lead worship. To my surprise, I felt at home in this role, yet it still took another few years for me to answer my call to ministry.

Throughout my life I have felt the call to help others and I searched for many years in my professional career to fulfill that call. I felt rewarded in my previous career as a personal trainer, yet something was still missing. Then, one day I was talking with the Reverend Laura Biddle and mentioned the lack of fulfillment I felt from work. As we talked, she said, "I think you are called to ministry". When she said that, I paused and thought what? Pondering to myself: I do talk to all my clients about my faith and often their faiths, but am I really called to ministry? Looking back, I see that my call to help others was grounded in faith and the need to share God's love and light. Going to seminary had never crossed my mind. Even though we had a female minister, my childhood and adolescent faith taught me that women were not allowed to be church leaders. Instead, as a teen and young adult I had aspirations of being a coach, doctor, lawyer, teacher, but never a minister.

One of my strongest moments of revelation was when I remembered my mother's reason for my name, Christina. She wanted one of her children to have the word "Christ" in her name. When I remembered her reason for my name, a feeling of pure joy and excitement filled my soul. I felt a warm energy run through my body and it was then that I knew for sure God was –and is– calling me to ministry.